After 3 days in Kep, beaching, pooling and islanding, we moved on to Phnom Penh. The 3 hour bus journey took just under 6 hours, on some pretty awful roads – and seeing how roads are one of the few things the Cambodian government does for its people, the journey was a good indicator of their effectiveness. 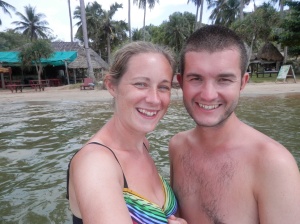 Phnom Penh has a fairly compact city centre, and from our guesthouse to the river is around 20 minutes walk. You can’t go more than 100 metres though without being offered a tuk tuk or moto – apparently one of the weirder western traits is that we like to walk places. The mix of French colonial style buildings and roads, crossed with the crazy pace and traffic of an Asian city give it a really interesting feel. 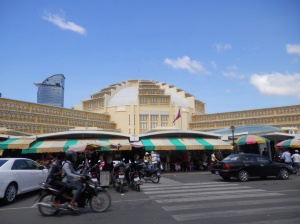 Our home for the next 5 week (4 left now), is the Tattoo Guesthouse, a place for long term volunteers. It’s a bit rough and ready, and our room wasn’t the cleanest when we got here, but after. Laura baby wiped the walls and we unpacked it’s actually quite nice. The main problem is the lack of wifi in the rooms, meaning we have to go downstairs to use the internet – champagne problems… 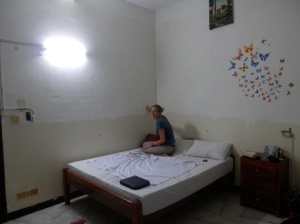 On our first Monday, along with 7 other newbie volunteers, we were picked up by the guys from Star Kampuchea to find out about our volunteer placements. The orientation day was quite fun, a mix of Cambodian history lesson, Khmer speaking practice and role play games about the placements. We also went to the Russian Market and bought mobile phones, and it’s quite novel to be using one again after so long. This day also gave us a taste of the Cambodian working practice as well, with a 2 and a half hour lunch break in the middle of the day! On the Tuesday we had a city tour, as well as visiting the nearby Killing Fields at Choung Ek. Nowadays people know all about the Khmer Rouge and the awful things that happened in the 70s, but actually going there and reading about things was very intense and disturbing. We also visited a Buddhist pagoda, where Law and I were the only ones not to pay for a blessing and a bracelet. Karma could get us for that. 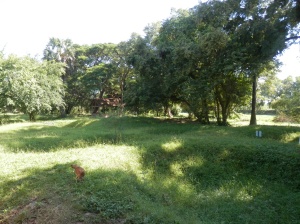 Finally, the Wednesday was supposed to be the first day at work… Except for me, it wasn’t. It was a national holiday, so no school! No such luck for Law, so while I took it easy, she went to work at the NGO Farmers Livelihood Development. They offer training to people in rural communities and Law is working with their marketing person to develop a strategy, which she describes as weirdly similar to Cornwall College. She can write more about it next time, but some highlights include a couple of long meetings entirely in Khmer, and a weeklong trip to the countryside!

I started work on Thursday, and my school is called the Center for Children’s Happiness. It’s an orphanage attached to a primary school, so after a morning of teaching ABC and saying ’hello’ a lot, I got asked to work with an older group of boys who need extra English. So, from 7am to 11am I have 10 or 11 teenage lads to teach English and Maths too, before they start High School at 1pm (after another 2 hour lunch break). I’ve only done a few days, and it’s both exhausting and fun. The school is half an hour away so I get a tuk tuk at 6.30, and their English ability ranges from excellent to poor, so it’s hard finding things to keep everyone engaged. There isn’t a Khmer translator either but one of the boys is older, and his English is very good so he has essentially become my assistant. During the breaks, he asks hundreds of questions about me, England and anything else, and writes down everything I say for extra practice. 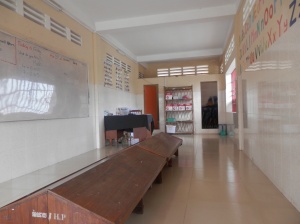 After an afternoon of working with the younger ones, I get home at just after 5pm, which is just about the longest day of the volunteers here. Law is starting at 7.30, whilst a lot of the others tend to work from 8 or 9, have a long lunch break and then finish by 4. I did sign up for teaching English, but I’m secretly jealous of the volunteers in the other orphanages whose days consist of play, nap, four hour lunch, play and then home! 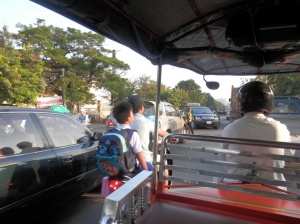 Laura is currently on her trip in the countryside, and doesn’t get back until Friday. It is bizarre not being together after not doing anything separately for months, and while her phone signal isn’t great (she has to climb a hill in the middle of nowhere), she is having a good time, and Mondulkiri is one of the more beautiful but less visited provinces. I know he’s on standby, but Mr. Bower doesn’t need to do a ’Taken’ rescue mission yet. It’s another day off for me today (lots of holidays here), so I’m heading out shortly with some of the other volunteers, whose youth only annoys me intermittently!

One thought on “The working week”