The awkward moment when your in-laws gate crash your honeymoon…

After our long weekend in Sydney, we flew to Auckland to spend just over 5 months in Middle- Earth itself, New Zealand. As our special guest blogger Mr B has explained, the Bowers met us at the airport with their excellent homemade sign, and we were hugely impressed that they didn’t vault the barriers and run towards us as soon as we got through immigration! 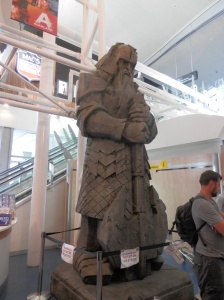 This guy was also waiting for us at the airport

We’ve been here for 2 weeks now, and each week couldn’t have been more different! After being reunited, we drove out to the Coromandel Peninsula to spend a week in a Bach, a house overlooking the beach and the sea with spectacular views through the wall-to-wall, floor-to-ceiling glass and balconies on every level. After 5 months backpacking and hostels, this place was heaven. We had a proper cup of tea, then some crisps and dip, and just like that, we didn’t miss the rice and noodles any more. 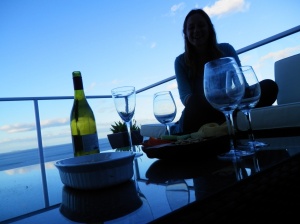 A nice change from rice

The week flew by too quickly, and we had a great time. The nearest beach was just a short walk down the cliff path, and the ‘busy’ days had about 20 people on it. On our second full day, I drove a car for the first time in months and we went from Tairua, where we were staying, up to Whitianga – before our wedding we bought Mr and Mrs B a voucher for a scenic flight over the peninsula from there. 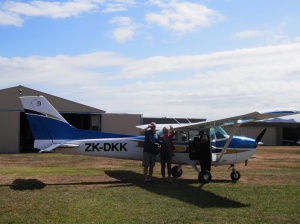 After waiting about 20 minutes, a little plane landed and the pilot, who looked younger than me, hopped out, gave the Bowers a map and let them decide on their own route over the area. I think they were suitably impressed! That afternoon we drove over to Hot Water Beach, so-called because under a certain part of the beach at low tide, a thermal stream over the sand. People rent a spade, dig a pool, and in an area about 30 metres square, everyone sits in their own handmade hot spring! 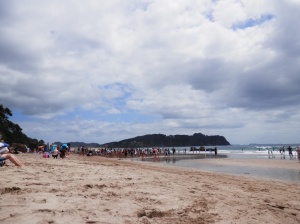 Spot the bit with the hot water 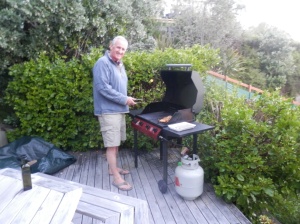 Hail to the chef

During the week, we also went kayaking in the local estuary, visited the amazing Cathedral Cove (the walk there along the cliffs was spectacular, and the archway in the cliffs is awesome) and ate a lot of amazing food. One night, we went out for a meal and after we’d eaten went to watch a band, and the small audience of drunk oldies singing along turned out to be mainly from Cornwall as well – small world. 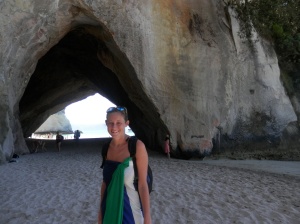 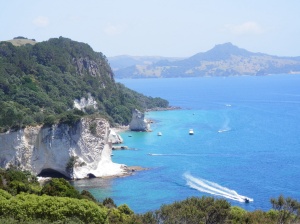 The only drawback was the wifi – there wasn’t any at the house we were staying in, so we had to go down and sit outside the local library to use it. Whilst this wasn’t a bad thing in itself, one morning that Law and I went down and left Mr and Mrs B at the house, around 5 minutes after we left a pod of dolphins swam past and essentially performed in the bay the whole time we were out. Bottle-nosed jerks. 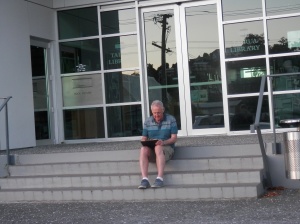 Using the only wifi in the village