End of the van

It seemed impossible to leave Queenstown without doing at least one expensive day of adventure activity, so we decided to go with a Dart River jet boat / kayak day trip. It was expensive, but also totally worth it! We drove out to Glenorchy, and the road hugs the lake the whole way with mountains in all directions, and when we arrived were kitted out in wetsuits, boots, fleeces, life jackets and waterproofs. It was a sunny day, but after the jet boat span it’s first 360, the outfits proved their worth. 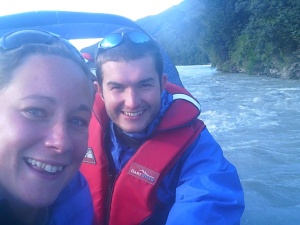 The boat zoomed up the river for about an hour, cutting close to the edges and flying over the shallows, stopping to show us some scenery or to do another 360 along the way. After an hour, and about 40km upstream, we transferred to some inflatable canoes aka funyaks, and began to gently paddle back down the river. It was nice to take the time to properly enjoy the views, so once again a load of photos that will never do it justice were taken. We stopped for a picnic lunch, and one point canoed (funyaked?) up a tiny, narrow little gorge of glacial melt, where the water was bright turquoise, before heading back to the trucks. On the drive back, we went via a place called Paradise, where loads of scenes from LOTR were shot. Best. Daytrip. Ever.

Not the worst picnic spot ever

After leaving Queenstown we drove up the West Coast, over the Haast Pass, camping at some really nice sites along the way. Whilst the DOC sites are basic, for $6 each they always seem to be in amazing locations. We visited both Fox and Franz Josef Glaciers and did a nice couple of day walks around them. At the rate the glaciers are retreating, it seemed like soon they’d only be accessible by helicopter. The glaciers were impressive, but the real highlight of the West Coast (aside from an awesome Whitebait fritter) was a FaceTime chat with the Roe family and the chance to say hello to their newest addition!

We crossed back over the country via Arthur’s Pass, the highest alpine pass on the Island, and decided to camp the night there. Whilst the scenery was stunning and we walked to a beautiful waterfall, it was the worst nights sleep yet – our van was attacked by Keas! The parrot-like birds have become so accustomed to being fed by people that they have no fear, and spent the night trying to eat our tyres and roof rack! No wonder they’re endangered… 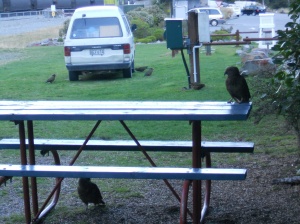 On our last full day with the van, we found a discounted horse trekking place online which was on the way back to Christchurch. Not being especially horsey people, we weren’t too sure what to expect, but it was brilliant. We rode for about 2 and half hours, across paddocks, along some huge steep paths over a valley, up and down some hills and along a river. As ever, the views were amazing and our horses, Mr Bojangles and Samson, were very nice to us! 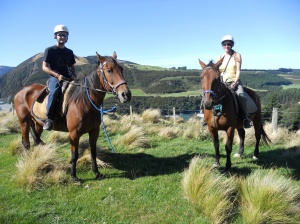 When the time came, we said farewell to the van at Christchurch, and after paying for a couple of windscreen chips (damn NZ roads), we headed into the city. We had a brilliant 3 and bit weeks in the camper, and going back to getting the bus has been tough! With a few days until we needed to be in Wanaka for work, we visited the Antarctica Centre in Christchurch (very ’cool’, but I was happy we got half price tickets) and then headed up the coast a bit to Kaikoura for a couple of days.

Chilling out in the Antarctic storm chamber

In Kaikoura, and special thanks to Mr and Mrs B for our early birthday present, we went out whale watching. Due to the position of the continental shelf at the Kaikoura peninsula (I listened and learned), there is a deep ravine a few miles off shore perfect for whales. We got the first boat of the day nice and early, and after bouncing out over the waves we stopped and waited, with the captain listening via sonar. Suddenly, a whale burst from the surface, and we got to watch him swim around for about 15 minutes before he put his tail up and dove back down for some food. As we waited for his return appearance (they stay down for around 40 minutes before coming back up for air – more learning), we watched albatrosses fly and fish around us. Awesome. 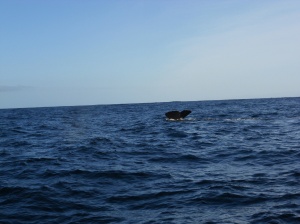 After all these weeks of fun (and spending), we’re now back doing another helpx at cafe / deli in Wanaka. For four or five hours work a day of pot washing, waiting and odd jobs, we are living in a nice house in town, eating delicious food and, with a view of snow capped mountains, went for a dip in the lake after finishing today. It’s tough being back at work.