More fun on the farm

After cruising over to the east coast we spent a lovely few days in sunny Napier. We didn’t do too much, other than admire all the Art Deco buildings which the city is famous for. The city was almost completely destroyed in an earthquake in 1931 and were rebuilt in the most popular Art Deco style of the time.

We don’t know much about architecture (being too tight to pay for a guided tour), but they were nice to look at! We also enjoyed a slightly less cultural visit to see the new X-Men movie.

After Napier we headed South via the towns of Hastings and Havelock North, where we did a a pretty cool walk up a really windy Te Mata Peak. We had lovely views over some of Hawkes’s Bay mountains, villages and vineyards and it was worth the 2 hour slog up the steep ridge which Sam had to talk me into! 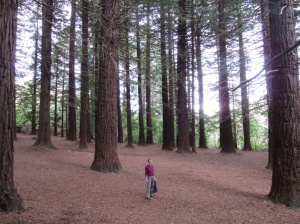 Redwood trees on the way to Te Mata peak

At the top of Te Mata peak

We then continued South, to a really rural part of the North Island, which we probably never would have visited, apart from the fact that we had organised another helpx job with a farming family, South of Waipukurau. Sam had been a little dubious about this one, because the family had four little children under four years old. Scary!!

But they were so lovely and we had absolutely the most fantastic week! Ru and Fleur run an 1100 acre family farm, raising cattle, sheep and horses. I’m definitely not the best when it comes to animals, but I think our farm experiences here have been some of my favourite weeks of our trip. Ru spent loads of time taking us around the farm, showing us the animals and explaining how the farm works. On one day he taught us to ride his massive motorbike (I was terrible), but Sam managed to ride all over the farm and even mustered a field of cows on it! 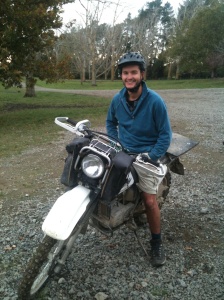 We also watched sheep being pregnancy tested and had a go at sheep shearing, which was a bit scary as I was terrified of stabbing the poor thing and creating some sort of sheep blood bath. But he seemed happy, if a bit colder, in the end.

Waiting to be shorn 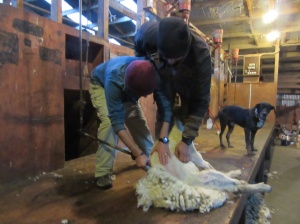 After all of that, playing with the four kids was easy! They were so cute and I got to play ALOT of princess, crocodile and dragon themed imagination games. Easiest week of work ever!

Us and the flock

Ono one afternoon went to visit a fairly nondescript hill, which claims to be the longest place name in the world. I thought the Welsh one was the longest (Llanfairpwllgwyngyllgogerychwyrndrobwllllantysiliogogogoch), which we’ve both been to and are proud to be able to pronounce. But at only 58 letters it is beaten hands down by the Maori name Taumatawhakatangihangakoauauotamateapokaiwhenuakitanatahu” (85 letters). There is absolutely nothing to see apart from a really long sign, and I couldn’t even buy a postcard, but it was probably worth a visit just for a photo.

The longest place name in the world

We also got to eat a serious amount of red meat this week. We had our own cottage to stay in, sit by the open fire and cook for ourselves in and we were given loads of steak, mince and sausages. Ru also cooked us some wild venison that he shot himself. Delicious! 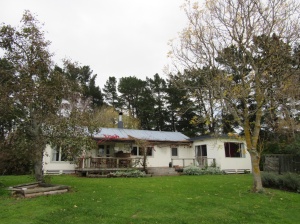 We then spent a lovely couple of days, back on the kiwifruit farm with Beth and Graham. Beth taught me how to ride a much smaller motorbike around their field, which was a lot of fun and we did some tree pruning – Sam getting to be very manly with a chainsaw. 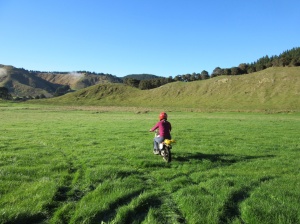 Getting back on the horse

Graham then headed off for a hunting competition (he won $1000 for shooting a ginormous wild pig!) and Beth went to join him, so we fed the dogs, cats and chickens and had a lovely chilled out time farm sitting for a few days.

We’ve had an brilliant few New Zealand farm experiences, and although I’m not completely converted to being an animal lover, the people are awesome.

2 thoughts on “More fun on the farm”