So, we are in America! The last landmass, last but one country, and last month and a bit of our gap yah. Back in the northern hemisphere, and into the summer and a land where the sun doesn’t set at 5.45pm! The change of pace from our last couple of months in NZ and Fiji, where we took things easy and took our time travelling, has been extreme. We’ve been doing different things every day and in just our first week have done so much. The blog feels a bit behind, so we’re now trying to catch up a bit.

Driving here is scary for all kinds of reasons

Our flight out of Fiji left at 9.30pm on the 6th July, and after some uncomfortable sleep and the massively disappointing Anchorman 2, we landed 11 or so hours later in LA. It was about 1.30pm on the 6th July, a hell of long day. Dateline crossed, we kept our wits at the border control counter – “What exactly is the nature of your relationship?”, got our bags and then encountered the first big challenge…

We had booked a car for the first three and bit weeks here, which is all good in theory but when you’re a bit dazed and confused the 6 lane freeways and driving on the right side of the road can be a bit scary. I was pretty pleased when we made it off the freeway and into Santa Monica and found the apartment we were staying in. Tensest 10 miles ever. The place we were staying was great, and the friendly owner drove us off down toward her place at Venice Beach that evening. Coming from the peace and quiet of our last few months, the crowds, traffic and heat were a bit intense. We were loving it pretty soon though, it just feels and looks so iconically American. The pier and boardwalk, the flags, the Baywatch style lifeguard huts and the Stars and Stripes. Awesome. 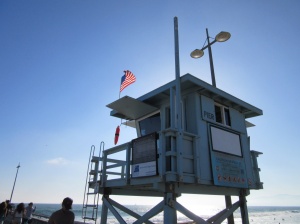 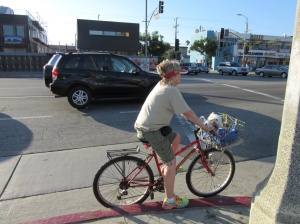 After a fairly epic sleep, we drove into the city and found the way to Hollywood. Cheesey and crowded, the walk of fame, Chinese Theatre and all the textbook sights were so cool to actually see. Laura was disappointed that I only took photos of obscure stars, but Gene Roddenberry is a legend. The driving was a bit scary still though, so we ended up haggling a discount for an open top tour ride around all the sights. Very touristy, but totally worth the $25. Mullholland Drive, the Hollywood sign, Beverley Hills, Rodeo Drive, Sunset Blvd and various celebrity homes – surprisingly good fun. 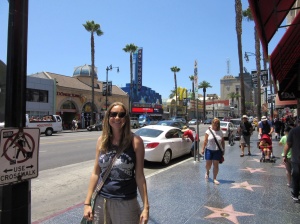 The drama degree finally pays off 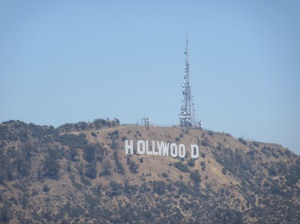 One of the big questions for our time here had to be answered – Disneyland or Universal Studios? I’ve never been to any kind of Disney, but we could get to the one in Paris easier than a return to LA so Universal won out, and we had an amazing day there. We got in reasonably early, and went straight to the lower lot where the big rides are. At this point the queues were quite short and first up we went for Transformers. It blew our minds! Even the queue was entertaining, designed like a military bunker with various videos being shown. The ride itself is a really intense simulator, and it totally felt like we were in an Autobot / Decepticon smack down.

The Jurassic Park ride was awesomely old school, animatronic dinosaurs and a massive water slide with a soaking ending. The Mummy ride was also great, a roller coaster / house of horrors hybrid. The Studio Tour was a real highlight, going through various famous sets like the Bates Motel, western, Mexican and European towns, the neighbourhood with the crashed 747 from War of the Worlds and the street from The Burbs (Desperate Housewives made it slightly more famous I guess). Amity, complete with Jaws attack and the King Kong simulator were also great fun. 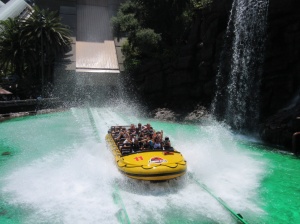 Jurassic Park gets you…

Waterworld. Better than the film

The whole day was awesome, all the rides great and we definitely got our money’s worth. I think we saw everything on the park map, even the kids’ rides. The next day we capped off our time in the City of Angels / mental roads, with two quintessentially LA experiences. We spent the morning and early afternoon wandering around Santa Monica and Venice, checking out the fair on the pier, Muscle Beach (not many people working out), the boardwalks and the general slightly freaky atmosphere. In the evening, we went and watch a sitcom being taped and became immortalised as part of the “live studio audience”. 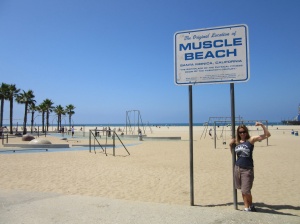 It’s free to go and see things taped, so we checked what was on and booked a few weeks ago. Slim pickings, so we ended up watching a show called The Exes being shot. It stars Donald Faison (Turk from Scrubs), Wayne Knight (Seinfeld) and Kristen Johnson (3rd Rock), and whilst it probably won’t make it onto our box set list, it was a great night. A stand up comic keeps the audience warmed up all night, before and during shooting, and ensures that you laugh at the right moments. It must be a hell of a job, especially on the 3rd or 4th take when we’d all heard the jokes a few times! It was the comedian’s birthday as well, so we got treated to a singalong as Turk jumped into the audience and sang Stevie Wonder’s Happy Birthday – surreally cool! No cameras allowed though 😦

As well as these celebs, our first genuine star spot came the day before. After touring Hollywood and Beverly Hills, the first proper famous person we saw was Eddie Marsan, a British actor, coming out of the supermarket. I said “big fan, sorry”, and he went “hello”. So LA.

LA wasn’t really one of the main places we wanted to visit in the states, but we had such a good time there. The size and traffic and heat were all intense, but there is so much to do and we’d love to go back there one day. But manifest destiny and go west young man and all that, so after 4 great days the road trip began properly, and we hit the Pacific Coast Highway. 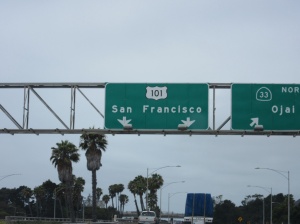